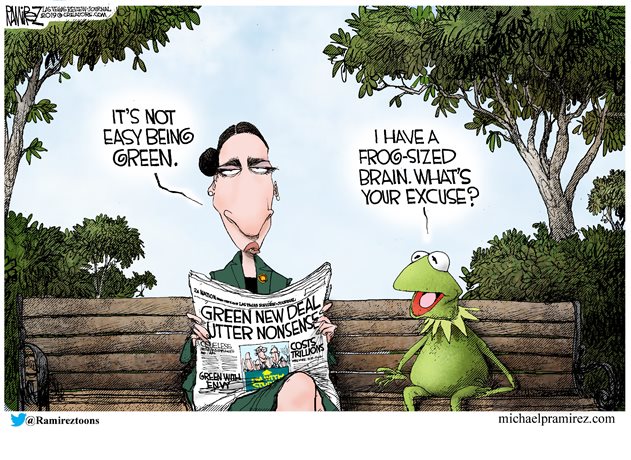 Rep. Alexandria Ocasio-Cortez (D-NY) has inserted her foot squarely in her mouth as her "Green New Deal" PR nightmare continues.

After removing an embarrassing FAQ from her website which failed to match the environmental legislation package she introduced on Thursday, one of her advisers went on Fox News' Tucker Carlson Tonight and lied about it.

The now-deleted version of the FAQ originally uploaded by AOC's office contained an absurd provision for "economic security for all who are unable or unwilling to work," a phrase which AOC adviser Robert Hockett - a Cornell law professor, claimed came from a "doctored document."
"I think you’re referring to some sort of document that some, I think some doctored document that somebody other than us has been circulating," said Hockett in response to Carlson's question about the "unwilling to work" statement.

"Oh, I thought that came right from her, that was in the backgrounder from her office, is my understanding," Carlson replied.

"No, no. She’s actually tweeted it out to laugh at it. If you look at her latest tweets, it seems that apparently, some Republicans have put it out there."


AOC’s office released a GND FAQ page w/ the “unwilling to work” line, then deleted it, then she quote tweeted screenshots of ppl trolling the GND FAQ page, then she RT’ed her supporter on national TV conflating the fake trolling w/ what the GND FAQ page really did say. Shameless.
— Jerry Dunleavy (@JerryDunleavy) February 9, 2019

Here's an archived version of the now-deleted @AOC's House webpage with the #GreenNewDeal FAQ's and the "guarantee" in all its glory: "It guarantees to everyone... Economic security to all who are... unwilling to work."https://t.co/UlOtwgD3dT pic.twitter.com/qr29dzU2fV
— Jeryl Bier (@JerylBier) February 8, 2019

Making it worse, AOC and her Chief of Staff are now continuing to bullshit people about it over Twitter!


There are multiple doctored GND resolutions and FAQs floating around. There was also a draft version that got uploaded + taken down. There’s also draft versions floating out there.

Mistakes happen when doing time launches like this coordinating multiple groups and collaborators. It's hard to have both a transparent and open process with many stakeholders while keeping all info locked down. But what’s in the resolution is the GND.
— Saikat Chakrabarti (@saikatc) February 9, 2019

And as if the Green New Deal hadn't generated enough negative attention this week, President Trump chimed in with a tweet mocking the plan that is almost guaranteed to draw a response from AOC herself.


I think it is very important for the Democrats to press forward with their Green New Deal. It would be great for the so-called “Carbon Footprint” to permanently eliminate all Planes, Cars, Cows, Oil, Gas & the Military - even if no other country would do the same. Brilliant!
— Donald J. Trump (@realDonaldTrump) February 9, 2019

Thank You Mr Durden, Zerohedge, and President Trump for rubbing it in.
Posted by D Bunker at 3:20 AM