This next page from the Daily Beast pegs San Francisco at a #1 rating for Psychiatrists per capita: claiming that its figures were derived from the US Census and Citysearch.com.

One might surmise that with all those Psychiatrists in San Francisco that it would be Super Sane: a Mount Rushmore sized Testament to the Benefits of Mental Health, Prescribing Boldly where no City has Prescribed before.

San Francisco is Nancy Pelosi’s Congressional District. That’s right; even With that God Awful Imbalanced Surfeit of drug peddling Quack per Citizen, the finest SF can scrape up for DC, is Nancy Pelosi.

How many of SF’s denizens are Shambling off to the Polls Chemically Imbalanced out of their ever loving gourds on Anti-thought drugs? How the Hell Else do you explain Nancy Pelosi?

“500 Million Americans will lose their jobs” (without the last $787 Billion bail out, ….. and Mark Levin has reported that Census Workers were being Fired either weekly, or even Nightly, and then Re Hired the next day to artificially inflate the job creation numbers. Yes, the current Regime is That desperate, and That full of it.)

In our previous NAMI post the only University listed (at above $5000 as a donor) with National NAMI was UCSF: University of California San Francisco, at $12,500 twice. We hope getting Suckered like that, what with all of NAMI’s Bio-$cienced, Bio Based BS, wasn’t a strain on their finances or RWJF agenda. (hat tip & thanks to Mind Freedom for the NAMI Bio-Bull-Science tracking)

Determining the impact of parental notification of children's weight and fitness status on youth obesity and fitness at the population level Grantee: University of California, San Francisco, School of Medicine (San Francisco, CA)

Improving the quality of addiction treatment through policy research on how models of chronic disease prevention relate to drug and alcohol treatment Grantee: University of California, San Francisco (San Francisco, CA)

SF State University is not UCSF. RWJF however, is RWJF.

Understanding the role of providers and consumers in the engagement and retention of homeless individuals in substance abuse treatment programs Grantee: University of California, San Francisco, Institute for Health Policy Studies (San Francisco, CA)

Planning for the Robert Wood Johnson Foundation Commission to Build a Healthier America to stimulate debate on the socioeconomic gaps in health Grantee: University of California, San Francisco, School of Medicine (San Francisco, CA)

Gee; hope that $25K from UCSF (the ONLY University listed) didn’t strain their RWJF Targeting of America’s Unsustainable (as in headed for Pluto) Govt. Healthcare Programs, or that it didn’t adversely affect those RWJF initiatives promoting National Social(ist) Engineering: (the Cause of that Pluto bound economic Disaster)

like the 2 Grants for $6 Million on Health and Society Scholars.

‘Society’ is a Disease??? Requiring $6 Million in Medical Research/Intervention?

Or Maybe UCSF just shunted their NAMI bucks out of the $168,350 Grant for Children’s Weight and Youth Obesity because once they hit $143,350, they realized that the RWJF Risperdal packing that Obesity and Diabetes onto kids, ….. simply couldn’t Afford another $25K worth of scrutiny.

BUT WAIT, THERE’S MORE! ….. If you buy the RWJF Pocket Brain & Economy Shredder in the next 4 minutes;

And SF State University across town got themselves Half a Million over 3 years to study the Well-Being of Lesbian, Gay, Bisexual & Transgender youths of Ethnically Diverse families.

Apparently, Non White youths who have a Sex Change operation are 3 times more attractive as slam dunk lifers for J&J’s antipsychotic sledgehammer. (after the reality of what they’ve actually Done to themselves hits them) than ‘Other’ kids who become Obese Diabetics from Risperdal thanks to the Wellness Centers in Public Schools.

Also of note is that the Childhood Obesity Grant only ran for 1 year, (hmmm) as opposed to the 2nd, $5.5 Million, Political ‘Society Scholars’ Grant, which is budgeted/projected for 5 years: the way the old USSR before President Reagan broke its Stalinist, Collectivist back, kept covering its ass by pushing all of its Collectivist, Communitarianist, FAILURES, ….. Off, ….. for 5 years down the Yellow Brick Road, with endless 5 year plans/delays/smoke screens.

Since San Francisco is so disproportionately drowning under Mental Health, let’s see who is in charge of SF’s ‘Mental Health’.

Why it’s none other than the Eminent Psychiatrist and all around Cultural Competent himself, Dr. Francis Gordon Lu, whose 65 pg. Curriculum Vitae details all the Mental Illnesses he has personally cured.

We Are talking Psychiatry here, which hasn’t ever cured SQUAT beyond Curing/Coordinating/Networking, to have their own Medicare and Medicaid Claims NOT kicked back to them by Govt. unpaid, because that’s the Only Real Science the Mental Health Racket will Ever master.

Dual Diagnosis is now All the Rage in Psychiatry:

(as concocted by the FRAUDS on our sidebar.)

for oodles of System Integration and implementing System Change upon those Resistant to System Change: as in Free & Sovereign Citizens who’ve NO use for any of their Collectivist “What’s mine is mine, and what’s Your’s – (health and Money) – is mine”: so that I can peddle more brain eating Pharmaceutical Snail Bait and then go pose for Group Glamour Pics,…. With other Ideates who Ideate that parroting Communist Party Change Agent speak is Tres Chic and so Nouveau.

Medicare and Medicaid REFUSE to pay on more claims than Private Insurers do. So Zia your Psychiatric Meal Ticket and Blood Suck it as Insane, by telling Uncle Sam that your marks are Incurably ILL TIMES 2. Voila, far fewer Claims kicked back, and far More Govt. Monies paid out/pissed away.

Back to Dr Lu: this Eminent Psychiatrist proudly boasts among his endless Blue Ribbon Panels/Committees/Conferences (all that’s missing is the cocktail & beluga on crackers tally), his:

Siskel & Eberting himself off to the Esalen Institute for 18 consecutive years - to review 50 year old Box Office Bombs which Nobody else gives a shit about, except possibly his fellow, co-reviewing, Curriculum Vitae accumulating, Psychiatrists.

Yes, that’s among his Life Saving Accomplishments too, as a Panel Discussion, advancing the Psychiatrist’s Art of GETTING PAID (for over 30 years) to PATHOLOGIZE everyone Else while Aggrandizing themselves, ….. for Curing absolutely Nothing, …. ever.

Going to the Movies, BY Psychiatrists, is now Written up as a Pseudo Medical Justification to Blow Their Own Horn.

Failure in California: the Headwaters of Failure Nationwide.

Previously, we ran a short on San Francisco’s Community Mental Health Center: Richmond Area Multi Services: which sits squarely in the lap of SF’s Movie Reviewer in Chief. We Linked to an SF City Govt. memorandum detailing an Independent Auditor’s Review of RAMS, and after we linked to it, we now get a return saying “Oops, Sorry, That pg is no longer available.” (after Being available for over 3 years, …. Before we linked to it)

So, we’ve jpg’d this Bureau of Useless Bureaucrats embarrassment detailing the obscenely expensive travesty of RAMS Mis-investment/Waste, of Millions of Dollars of public monies.

“Finally, we determined whether RAMS had achieved the targets for a small, purposefully selected sample of performance measures set in its adult and children’s services contracts with DPH for fiscal year 2004-05. Out of 92 items labeled as performance objectives in these two contracts, about half (47) had measurable targets. Of these 47 performance measures, we purposefully selected and tested 7 and found RAMS did not meet the targets for 6 of them.

[Ed: You try mounting wheels on cars on an assembly line, and having More than Half of them Fall Off, and find out how long it takes You to get Fired. But better still; Tell your employer that Your performance IS up to snuff, and that it’s His expectations which aren’t. You’ll be lucky if he doesn’t have you physically Dragged off his premises.]

“Two other measures of the six concern the Employment Services Program that RAMS operates under a contract with the State Department of Rehabilitation. ….. According to RAMS chief executive officer, management personnel of RAMS, DPH, and the state met in late 2005 and the parties agreed that the targets for these programs are unrealistic and will be reduced.” 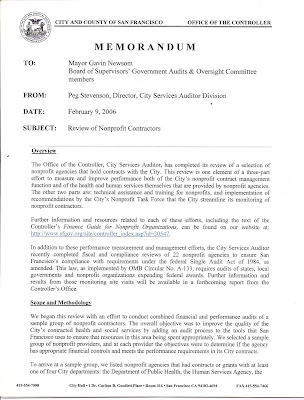 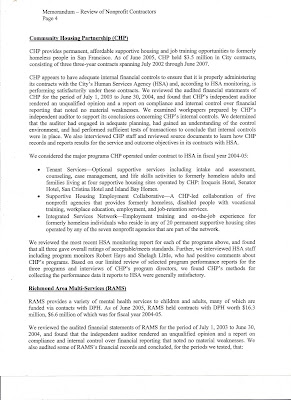 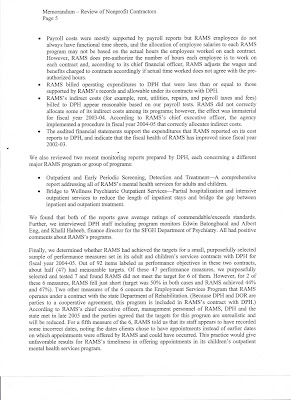 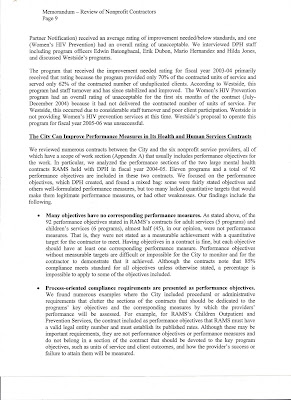 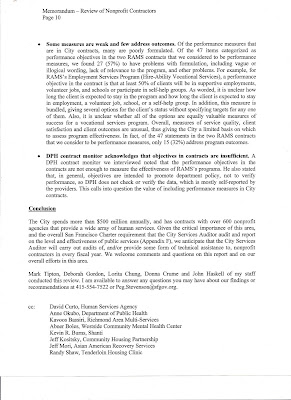 [Ed: Communitarianism, System Integration, Inter-Agency Co-ordination, Whatever you want to call it, This Balls Up/Cover Up is the Only outcome that will Ever pop up under too much Centralized Bureau of Bureaucrats Punch Drunk on Public Money Control: ….. Massive FAIL.]

Now, for even More of the Money behind Why this NATIONAL Psychology Training Center was NOT shut down and boarded up:

2 new Vacant, Waterfront Lots in Florida don’t come cheap, - $8.45 Million - even if you’re William C. Weldon: CEO of J&J/Risperdal. And that recent Back Surgery CEO Weldon had – just in time to miss out on having to Testify, In Person, to Congress about Why so many of J&J’s Over The Counter products have been recalled - had to set him back at least another speck of pocket lint.

And as for J&J helping the ‘Mentally Ill’ BASH the Be Jeezus out of their Mystic, Disease Mongered Billing Codes, along with their mind and body, here’s 2 more Lawsuits to peruse:

We will be highlighting sections of these filings in future posts

& again; Thank you Pharmalot. for the ongoing Blow by Blow on J&J/CEO Weldon, and all those other Companies/Execs/Investigations.

Mr. & Mrs. America; Do you Really Want 435 Nancy Pelosis in the US House of Representatives?

‘Cause Nancy’s what you get, and Keep getting, from SF’s Sardine Can full of 100% Incompetent to Cure Anything, Psychiatric Borg.

With all the Shrinks in SF, RWJF $, and the Abysmal failure/State Govt. cover up evinced in the RAMS Audit; If this is the Best Psychiatry can achieve, ….. in such a perfect Psychiatric Petrie Dish, ….. it sure as Hell isn’t going to achieve any Better than that anywhere else.

Look up the Psychological Charlatans Billing Govt. Healthcare Insurance in Your town. They love bragging about their educational credentials and NAMI Drone affiliations – because that’s Who they are, and All they are - and see if they Trained at 1 out of 92 RAMS, and if they’re even now infecting More of their own Aspiring Ilk with those same Failing Performances, in Your Town.

The Mermaid adorning its Flagship’s prow, ….. is Nancy Pelosi?

At the Request of Senator Grassley, NAMI has made available pdfs detailing their major funding sources.
NAMI: National Alliance on Mental Illness, Major Foundation and Corporate Support
What Ought to have you upset here, is not that a Self Supposed Patient Advocacy Group/Pharma Store Front is predominantly Owned by Drug Money, but that they can be Bought So Cheaply, ..... considering the Hundreds of Billions Pharma's raking in.
Mind Freedom has more.
US Senator Turns Investigation to NAMI State Chapter Drug Company Money.
Thank You Very much, Sen Grassley and Mind Freedom.
Posted by D Bunker at 3:25 PM 2 comments: