A petition on the White House web site which calls for an investigation into the link between psychiatric medication and violence has been blocked after a week (out of the month allotted) in which it had garnered 6,635 of the 25,000 signatures needed. A videotaped response by President Obama, addressing issues of gun control, school safety, and mental health care (but not medication) has been placed on the petition’s page.
Petition →


Thank You Mad In America.


And if you need to know why Milton Freidman's here again:

Taxing even Pharma isn't going to force them into Compliance with all the existing Laws they're breaking.

Without all those Taxes which Feed Pharma, they'd simply Starve and Most of the Problem would be Solved thank you very much.

And Thank You too, very much, Mr. President

With this Latest Attempt to maintain a veneer of Plausible Deniability by stifling politically inexpedient Scientific Inquiry, the Obama Regime is making Certain that they won't have Find Out, that it IS their Fault.


which has a new url, here:

Most of the stories on this site describe events that occurred after the year 2000.  The increase in online news material and the efficiency of search engines has greatly increased the ability to track stories.  Even these 4,800+ documented stories only represent the tip of an iceberg since most stories do not make it into the media. There are 115 cases of bizarre behavior, 66 school shootings/incidents, 68 road rage tragedies, 19 air rage incidents, 101 arson cases, 70 postpartum depression cases, over 1,000 murders (homicides) or murder attempts, over 300 murder-suicides (30% committed by women) and other acts of violence including workplace violence on this site.  There are also over 100 Journal Articles and FDA reports listed in the Index.  They are at the top of the Index immediately below the 66 school shootings/incidents and the 29 "won" criminal cases.


As the country is on the verge of going over the “fiscal cliff,” President Obama signed an executive order to end the pay freeze on federal employees. Translation: some federal workers—ranging from the vice president to the Supreme Court and members of Congress—will be getting a raise. ViaThe Weekly Standard:

According to disclosure forms, Biden made a cool $225,521 last year. After the pay increase, he'll now make $231,900 per year.
Members of Congress, from the House and Senate, also will receive a little bump, as their annual salary will go from $174,000 to 174,900. Leadership in Congress, including the speaker of the House, will likewise get an increase.
Here's the list of new wages, as attached to President Obama's executive order: 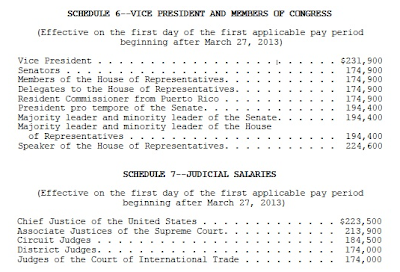 "A new executive order has been issued providing for a new pay schedule beginning 'on the first day of the first applicable pay period beginning after March 27, 2013,'" reports FedSmith.com. "The pay raise will generally be about 1/2 of 1%."

It doesn’t matter if the raise is $1 dollar or several thousand dollars, or if only some will actually see a pay increase—it’s the principle and timing of this move that’s troubling to say the least, especially given the fact that 88 percent of taxpayers will begin to see less of their paycheck if/when America goes over the “cliff” in a few short days.

Thank you Townhall and Ms Barkoukis

"Members of Congress, from the House and Senate, also will receive a little bump, as their annual salary will go from $174,000 to 174,900. Leadership in Congress, including the speaker of the House, will likewise get an increase."

"No law, varying the compensation for the services of the Senators and Representatives, shall take effect, until an election of Representatives shall have intervened."

Would you rather live under the Constitution, or just make it up as you go under Presidential Executive Order?

The American People were So utterly Disgusted with this Crap that we Actually Amended the US Constitution to put a Stop to It. 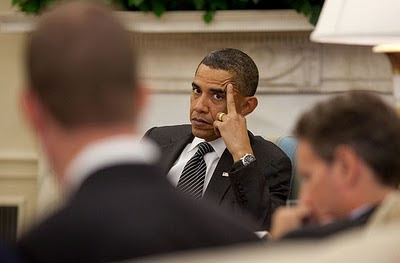 And we Still have Hundreds of Billions, perhaps Trillions, to Pay people to convict Other people of committing Thought and Mood Crimes.
Human Events has;
Geithner: Treasury Runs Out Of Cash On Monday
By: Neil W. McCabe 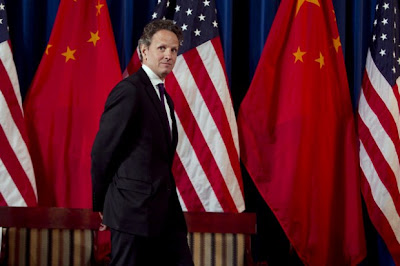 The 75th man to hold the office of Treasury Secretary informed congressional leaders from both parties by a letter dated today that the U. S. Treasury would hit its debt limit Dec. 31.
As of Dec. 24, the national debt stood at $16,337,556,561,533.65.
The current debt ceiling is: $16,394 trillion.
“Under normal circumstances, that amount of headroom would last approximately two months.  However, given the significant uncertainty that now exists with regard to unresolved tax and spending policies for 2013, it is not possible to predict the effective duration of these measures,” wrote Timothy F. Geithner, who served as the president of the Federal Reserve Bank of New York prior to his current posting.
Geithner said the reason for the short notice and the short leeway is the confusion caused by the failure of President Barack Obama and the Congress to resolve tax and spending issues regarding what has become known as the “fiscal cliff,” the mandatory spending cuts and tax increases written into the Budget Control Act passed in August 2011. 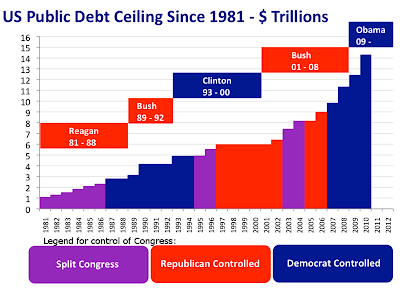 
It's a countdown until massive cuts hit Medicare providers. With only a few days left in the calendar year, providers are waiting with bated breath about the outcomes of fiscal cliff talks on Capitol Hill. And unlike previous short-term fixes, the threat is real this time, American Medical Association (AMA) President Jeremy Lazarus told Forbes. The decision of lawmakers will determine the outcome of Medicare cuts that hang in the balance in these final weeks of the year.

Unless Congress and the White House administration can agree on plans to avoid the fiscal cliff, a 27 percent reduction in Medicare payments will go into effect Jan. 1, 2013--12 days from today.

Providers, particularly AMA, have lamented over the short-term stop gap measures--15 of them in the past decade--to the sustainable growth rate formula under the Balanced Budget Act of 1997, Forbes noted.

"For physician practices, it is a terrifying situation," Lazarus said about the reductions that could cost upwards of $35,000 per physician.

AMA yesterday wrote a letter to Congress, complaining of the holiday tradition of temporary fixes.

"This continuing game of political chicken is unacceptable and dangerous to the future of the Medicare program," AMA CEO and Executive Vice President James Madara said. "Every time, Congress assures patients and physicians throughout the year that it will not take effect; yet, we find ourselves in the same situation year after year."

Madara noted that the pattern of Congress inaction has providers unsure of their participation in mandated programs for e-prescribing, electronic health records, ICD-10 implementation and quality reporting.

Similarly, the Alliance of Specialty Medicine on Friday called for a permanent replacement to the SGR formula, noting that physicians are reconsidering their participation in Medicare at all and even turning beneficiaries away.
Hospitals, in particular, will bear the brunt of Medicare cuts, The New York Times reported.

"There is no such thing as a cut to a provider that isn't a cut to a beneficiary," said Steven M. Safyer, CEO of Montefiore Medical Center in the Bronx.

The Medicare Payment Advisory Commission recommends reining in costs by reducing payments for hospital outpatient services that have higher charges, which added $1.5 billion to healthcare costs, MedPAC said. However, the American Hospital Association blasted the "site-neutral" policy, arguing that their facilities spend more on safety-net services that other facilities don't offer and therefore are entitled to the Medicare reimbursements.

Any agreement from the latest talks between the GOP and the White House will suspend or permanently repeal the doc fix, the Fiscal Times reported.

Amid the budget negotiations between Obama and Speaker John Boehner, Republicans have proposed increasing the Medicare eligibility age to 67 from 65, as well as reviving Paul Ryan's proposed "premium support" program.

An Obama compromise this week put $400 billion in healthcare cuts on the table. Democrats may concede to eliminating the controversial Independent Payment Advisory Board, the 15-person panel charged with recommending comparative cost-effectiveness, The Hill's Healthwatch reported.

U.S. Health & Human Services yesterday sent a notice to more than a million physicians, notifying them of the reimbursement cuts, estimated at $14 billion in 2013, according to CQ HealthBeat.

If Congress does not craft a deal before the end-of-year deadline, hospitals will have some tough decisions to make. Although some executives favor the automatic cuts, viewing them as an equitable way to reduce spending, others say they will have to consider eliminating services or closing hospitals, the NYT noted.

"This is not crying wolf," Montefiore's Safyer said about the cuts. "I don't have a Plan B."


And Psych/Pharma is fed and sustained How, after curing What?

IF, Psych/Pharma had to feed Itself rather than being spoon fed By Government, Most of it would simply fold up operations and go get honest jobs.


"This continuing game of political chicken is unacceptable and dangerous to the future of the Medicare program," AMA CEO and Executive Vice President James Madara said. "Every time, Congress assures patients and physicians throughout the year that it will not take effect; yet, we find ourselves in the same situation year after year."

Is The AMA Covering Up Medicare Fraud?

"And Yet, we find ourselves in the same situation year after year."

Keep throwing other people's money at them in ever increasing amounts. That'll straighten them Right out.
Posted by D Bunker at 10:51 AM No comments: