The Washington Times has;

And before we even get started, Congratulations and Thanks to Congressman Ron Paul (R-Texas) for his tireless efforts to get this done.

"In a move that serves as a capstone to Rep. Ron Paul’s colorful career, the House on Wednesday approved a bill that would let Congress’s chief investigators conduct a full audit of the Federal Reserve’s shrouded decision-making process.

The overwhelming 327-98 vote sends the bill to the Senate where Majority Leader Harry Reid, Nevada Democrat, has previously expressed support for an audit — though it’s unclear he’ll carve out time for the legislation this year."......

"Mr. Frank, though, said giving GAO powers to look at monetary policy is a precursor to Republicans trying to change the Fed’s mission overall to focus solely on monetary policy, not employment."

continue reading Wash Times coverage here.
Mr, Congressman Frank, as usual, is lost in the bushes. One, the Fed is the primary culprit responsible for America's Employment Plummet because if the Fed didn't Exist, Mr Frank and Co. couldn't keep writing all those blank checks.
Auditing the Fed, if the Senate gets on board, is a precursor to Ending it. If America gets a really good look at what the Fed are actually up to, even the most vocal supporters of Mega Government and its  back breaking, confiscatory benevolence will join the chorus calling to end the Fed.
Congress themselves are Constitutionally Required to be in charge of the money, and if they ever become so, they'll find it much more difficult to justify writing all of those checks they've been writing on the backs of future generations.

"Fed Chairman Ben Bernanke doesn’t like the prospect of such a broad audit, calling it a “nightmare scenario” last week and saying it will lead to politicians second-guessing his decisions."

Where will you be employed After we get Rid of you and your decisions by getting Rid of your Federal Reserve System?
Posted by D Bunker at 2:23 PM No comments:

8,753,935: Workers On Disability Set Another Record In July, Exceed Population Of 39 States

8,753,935: Workers On Disability Set Another Record In July, Exceed Population Of 39 States
By Terence P. Jeffrey

And So It Begins: One In Ten Employers Already Saying They'll Drop Health Coverage
POSTED AT 3:21 PM ON JULY 24, 2012 BY ERIKA JOHNSEN
Posted by D Bunker at 2:11 PM No comments:

Mental Health with its endless cripples, corpses, and rapacious expense returning us no positives whatever is a scam we never Could afford, certainly not under the Bill of Rights, but in sheer dollars and cents, now more so than ever.

It's breaking Every Government program its attached itself to, and as its capture criteria widen and more people become ever more emotionally and perceptually disoriented, and physically sicker with Real diseases through being reduced to medical profit cyphers, the debt we've encumbered ourselves with to accelerate its encroachment has broken our back.

And SSDI is Where right now? The Weekly Standard has; 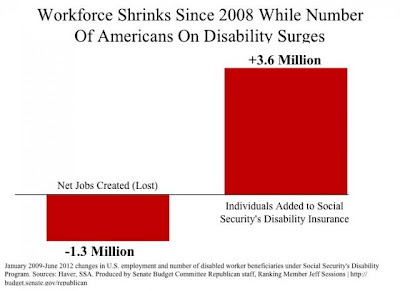 So drop us a line, those of you who've actually Gotten that FREE WhatEver it was you voted for in the last Presidential Election.

“It is clear there is a great need to distinguish between proper and improper disability claims, and to better incentivize and find acceptable work for those who are able… The administration of this program must be improved to avoid sinking our country deeper into debt, to ensure the program remains viable for those with disabilities, and to protect Social Security itself.”
WASHINGTON—U.S. Sen. Jeff Sessions (R-AL), Ranking Member of the Senate Budget Committee, issued the following statement today upon receipt of a report from the Congressional Budget Office about the immense growth in the Social Security Disability Insurance program. Over the last three months, more Americans have begun receiving SSDI benefits than have found jobs:


“Today’s report from the Congressional Budget Office reveals a dramatic increase in applications and awards for Social Security disability, placing the disability trust fund on a fast-track to insolvency in just four years. Amazingly, while fewer Americans are working than at the end of 2008, 3.6 million Americans have been awarded SSDI benefits over the same period. The growing number of people on disability and other federal benefits, combined with weak economic growth, raises serious concerns about the sustainability of the American economy.


It is clear there is a great need to distinguish between proper and improper disability claims, and to better incentivize and find acceptable work for those who are able. Today only 1 percent of Social Security disability recipients ever return to work. The administration of this program must be improved to avoid sinking our country deeper into debt, to ensure the program remains viable for those with disabilities, and to protect Social Security itself.


Not only does the surge in SSDI beneficiaries jeopardize that program, it also hammers Medicare. When a person has been disabled two years, they automatically receive Medicare benefits regardless of age. The CBO report states that in 2011, DI expenditures totaled $128 billion and Medicare costs for SSDI recipients were an additional $80 billion.”

Someone's going to have to pick up the check on this and more of our current Winning The Future nonsense. 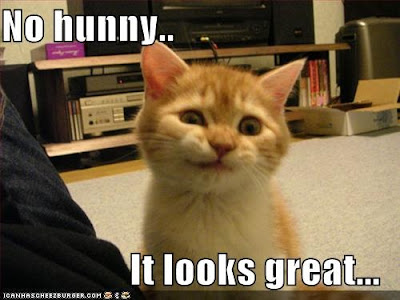 If you think Solyndra was a boondoggle, just wait till you get the Rest of your FREE ObamaCare.
Posted by D Bunker at 1:37 PM 1 comment: