The Indictment Against Leland Yee Puts "The Wire's" Clay Davis To Shame. 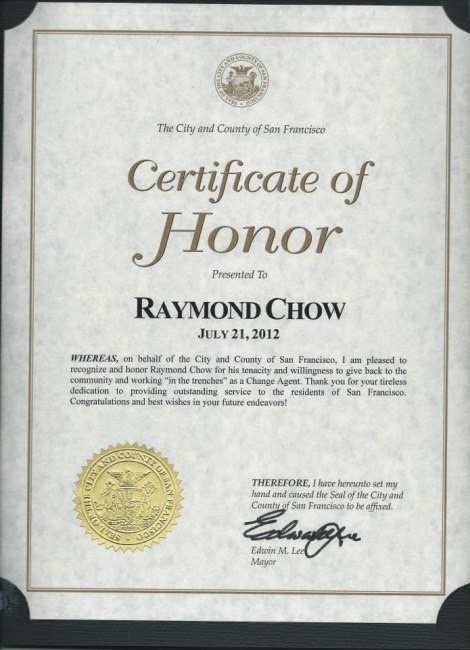 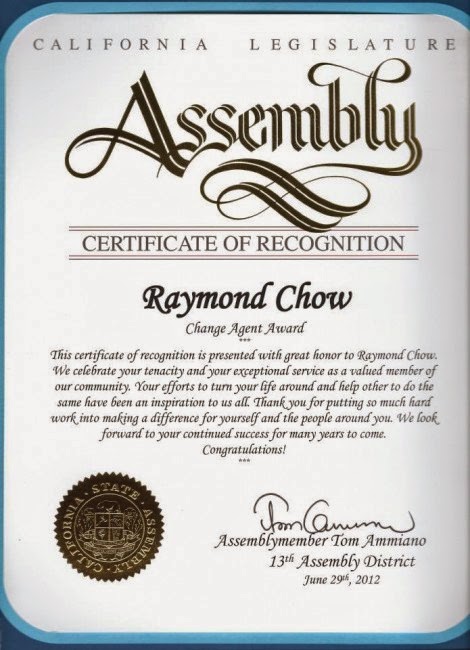 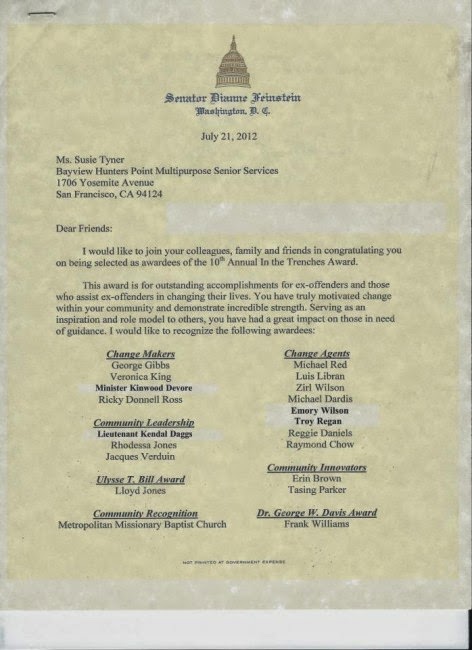 Zip also has video if you want more.

Note these Awards are all for being a "Change Agent".

But it's probably easier to get to various posts through a google search.

3 Awards, and one from SF's own "Turn Them All In" US Senator Feinstein, for being a Change Agent.

At what point does the goat actually gag?
Posted by D Bunker at 4:07 PM No comments:

After obtaining his doctorate in Child Psychology, Yee worked as a therapist in the Mental Health Department of San Francisco, the Oakland School District and with Asian American for Community Involvement, a non-profit that serves low-income people.[10] 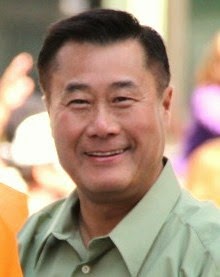 OK. Would somebody out there like to tell us about the 'Ethics' of the Mental Health set?

via madinamerica;
20 Year Data Show Antipsychotics Do Not Reduce Psychosis

Thank You MIA and Mr Cole.
Posted by D Bunker at 12:40 PM No comments: 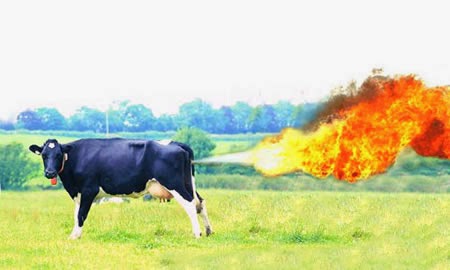 Yeah, not from The Onion.
Via Daily Caller:

As part of its plan to reduce U.S. greenhouse gas emissions, the Obama administration is targeting the dairy industry to reduce methane emissions in their operations.
This comes despite falling methane emission levels across the economy since 1990.
The White House has proposed cutting methane emissions from the dairy industry by 25 percent by 2020. Although U.S. agriculture only accounts for about 9 percent of the country’s greenhouse gas emissions, according to the Environmental Protection Agency, it makes up a sizeable portion of methane emissions — which is a very potent greenhouse gas.
“Cows emit a massive amount of methane through belching, with a lesser amount through flatulence,” according to How Stuff Works. “Statistics vary regarding how much methane the average dairy cow expels. Some experts say 100 liters to 200 liters a day… while others say it’s up to 500 liters… a day. In any case, that’s a lot of methane, an amount comparable to the pollution produced by a car in a day.”
“Of all domestic animal types, beef and dairy cattle were by far the largest emitters of [methane],” according to an EPA analysis charting greenhouse gas emissions in 2012. Cows and other animals produce methane through digestion, which ferments the food of animals.
Keep reading…


Thank You DC and Zip.

A Conservative News and Opinion Resource
NACHUMLIST
A continuous record of the White House and its administration
The Obama Administration: Year Six
President Obama's Two Hundred and Seventieth Week in Office
News and Notes:   "Socialism only works in Heaven, where they don't need it and in Hell where they already have it."
Donate
Video/Audio of the moment:    Antisemitism at the UN, Then and Now
3/27/2014
Obama and Your Privacy
Obama: 'The Government Should Not Collect or Hold This Data in Bulk'  'Instead, the data should remain at the telephone companies for the length of time it currently does today.'
Community Organizer to the World
Obama Gives Pope Vegetable Seeds, Francis Gives Obama Writings on Morality
Francis Stresses 'Rights to Religious Freedom' in Meeting with Obama
Getting popularity tips? Barack Obama hopes for 'Francis bounce' as he meets Pope for first time and tells him he is a 'great admirer'
Raw: Obama's First Meet With Pope Francis
President Obama Prepares to Meet the People's Pope
Obama Rock Star Tour Press Pass Ignores Vatican City in List of Stops
Obamacare
Obamacare Navigators Helping People Enroll At Mexican Consulates
Half Of Uninsured Say They Plan To Remain Uninsured
Obamacare: Taxpayers in the Hole for $1.5 Trillion
Extension of Health Law Signup Period Worries Insurers
Obamacare Forcing Another Michigan Hospital To Cut Budget And Fire Staff
2,240 complaints filed concerning 'Obamacare' in Colorado
Russian Reset
Ukraine Asks Obama for Military Assistance – Instead He Offers Food Rations
Ukraine Claims 100,000 Russian Troops Near Border
Russian Troop Movements Near Eastern Ukraine Trigger Fears of Imminent Invasion  House leaders voice 'alarm,' urge Obama to take action
How Putin Bullies Obama  The U.S. president declares a lack of interest in the Russian's motives—and it shows.
Russia To Create Own National Payment System In "Bid To Reduce Dependence On The West"
It's 3am and nobody's there
Obama's 'Incredible Mistake' over Phantom Kosovo Referendum
Obama and Syria
Here Is The YouTube "Start A False Flag War With Syria" Leaked Recording That Erdogan Wanted Banned
Flashback: The Time Three Years Ago When Hillary Clinton Called Bashar Assad a Reformer
Obama vs The US Military
Report: F-35 Delay to Harm U.S. Warfighting Ability   Costs skyrocketing as reliability plunges
Obamanomics
$1 trillion student loan debt widens U.S. wealth gap
Home Sales Plunge Most In 3 Years, Drop 8th Months In A Row
CBO: Minimum Wage Hike Will Increase Deficit  40 percent wage increase will hike deficit by $5 billion over 10 years
Final Q4 2013 GDP Misses Expectations, Rises 2.6% Annualized - Full Breakdown
Queen Michelle
Mooch tells Chinese how she survived American death camps 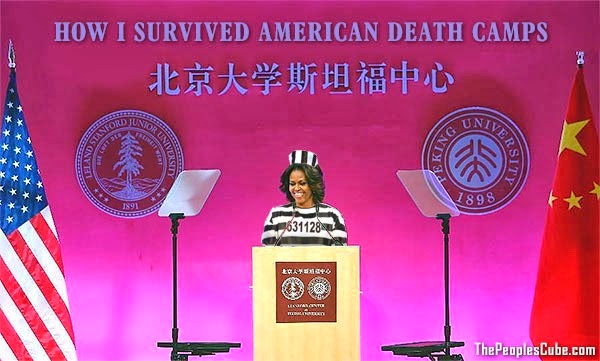 Obama and the IRS
Rep. Trey Gowdy: Lois Lerner Is Going to Be Held in Contempt No Matter What
Obama Ethics, Year 6
Obama Administration partnered with Hamas-linked Muslim groups to purge counterterror training of truth about Islamic jihad


Because I apparently did something nice for somebody recently, and this is God's way of showing His appreciation.

By: Moe Lane (Diary)  |  March 27th, 2014 at 10:00 Am
Seriously, this is amazing: “Known for navigating the state Capitol’s backrooms and this city’s complicated political landscape, state Sen. Leland Yee now is accused of consorting with notorious felons, accepting money for his cash-strapped political campaigns in exchange for favors and promising undercover FBI agents he could deliver connections to international gun runners.” They actually noted his political affiliation (Democrat) – note, though, that as per this article by my RS colleague streiff they apparently had to be prodded into doing it – and favorite hobby-horse (gun control*), and you will find very little in that article that is dull. But there is one item that needs to be pushed back on: “Senate President Pro Tem Darrell Steinberg, D-Sacramento, called the allegations against Yee “shocking” and “surreal.”"
‘Surreal,’ I will grant. But ‘shocking?’ In 2011 SF Weekly described Mr. Lee (who was then running for Mayor of San Franscisco) thusly:

Leland Yee is a political lifer who has served on the school board, the Board of Supervisors, in the state Assembly, and now in the state Senate, where he represents the Eighth District. He has built a public facade of earnest goodness that, if it were as much his essence as it is his veneer, would make him Sacramento’s top Eagle Scout.
But during that time, Yee has produced a series of possible ethical breaches so numerous and bizarre that voters might feel compelled to seek out extraordinary accomplishments to balance out his weird record.

It would appear that many people on the Left have known for some time that Leland Yee was dirty. They just didn’t realize that he was trying to run automatic weapons into the country. And while I will admit that I wouldn’t have myself guessed that somebody who once tried to go after video games for their ‘violence’ would get caught making shady arms deals, I feel that some of the shocked looks on California Democratic faces are just a bit, ah, disingenuous.
Via @qixtqatl, who could not believe that I was not on top of this story already. …Which is fair: this sort of story is like catnip for me.
Moe Lane (crosspost)
PS: If you’ve ever wondered what the Lefty equivalent would be to breaking news that a family values politician had just been caught with a teenage Thai ladyboy in a campaign contributions-fueled love nest, well, now you know.
*From that article: “In an interview on KPIX 5, Yee said that he was not going to be intimidated, because he believed so strongly in keeping guns out of the hands of bad guys. “This is not an easy issue,” Yee said. “But I am a father, and I want our communities to be safe, and god forbid if one of these weapons fell into the wrong hands.””
Tags: California, Gun control, gun-running, leland yee


Running for Mayor of San Francisco.

Thank You Redstate and Mr Lane.
Posted by D Bunker at 3:56 PM No comments: