Senator Tom Coburn (R-OK) has been ferreting out inane wastes of Public Monies by Govt.
NRCC has;
The Waste List
The Waste List > Total Value of Government Waste: $18,224,377,097

Unfortunately, the good Senator appears to have missed one:
http://www.nimh.nih.gov/index.shtml
because what it costs us to publicly fund NIMH to operate, at all, pales into insignificance compared to what it's actually costing us.
Have a look at just One of its revolting, public money paybacks:
National Institute of Mental Health: Violence Initiative: Junk Medicine In Jackboots

Thank You Senator Coburn and NRCC
Posted by D Bunker at 4:20 PM No comments:

Why did Marxists gravitate to Freud?

“Religion is a system of wishful illusions together with a disavowal of reality, such as we find nowhere else but in a state of blissful hallucinatory confusion. Religion's eleventh commandment is "Thou shalt not question.”

"America is a mistake, a giant mistake."

Freudo-Marxism is a loose designation of several twentieth-century critical theory schools of thought that sought to synthesize the philosophy and political economy of Karl Marxwith the psychoanalytic theory of Sigmund Freud.
Freudo-Marxism seeks to use the tools of psychoanalysis to diagnose the ills of society. Just as Freudianism views an individual's ego and super-ego as shaped by his unconscious id, Marxism views a society's culture and institutions as shaped by its underlying economic system. Thus a society's economic system and its relations of production function as its unconscious id; a society's culture functions as its ego; and a society's legal system, police and military function as its super-ego. From this point, Freudo-Marxism aims to reveal the illness of a society's underlying economic system by analyzing its cultural products.

Wilhelm Reich, pioneering Freudo-Marxist
The beginnings of Freudo-Marxist theorizing took place in the 1920s in Germany. After some discussions of the topic by the Soviet philosopherV. Yurinets and the Freudian analyst Siegfried Bernfeld, in 1929 the basic Freudo-Marxist text Dialectical Materialism and Psychoanalysis byWilhelm Reich was published, both in German and in Russian in the bilingual communist theory journal Unter dem Banner des Marxismus. As the end of this line of thought can be considered Otto Fenichel's article Psychoanalysis as the nucleus of a future dialectical-materialistic psychology which appeared in 1934 in Wilhelm Reich's Journal Zeitschrift für Politische Psychologie und Sexualökonomie. One member of the Berlin group of Marxist psychoanalysts around Wilhelm Reich was Erich Fromm, who later brought Freudo-Marxist ideas into the exiled Frankfurt School led by Max Horkheimer and Theodor W. Adorno.
For Wilhelm Reich, the principal point of contact between Marxism and psychoanalysis was the family. On the one hand, individuals' psychological development is critical during childhood – in particular as regards morality and sexual repression. On the other hand, e.g. Frederich Engels in The Origin of the Family, Private Property and the State criticised the family as the unit of cultural reproduction. Thus, among others, Reich wrote extensively about the “sociological function of the family.”[1]

The Frankfurt School (the "Institut für Sozialforschung") took up the task of choosing what parts of Marx's thought might serve to clarify social conditions which Marx himself had never seen. They drew on other schools of thought to fill in Marx's perceived omissions. Max Weber exerted a major influence, as did Sigmund Freud. In the institute's extensive Studien über Authorität und Familie (ed. Max Horkheimer, Paris 1936) Erich Fromm was the author of the social-psychological part. Another new member of the institute was Herbert Marcuse, who became famous only during the 1950s in the USA.

Eros and Civilization is one of Marcuse's best known early works. Written in 1955, it is an attempted dialectical synthesis of Marx and Freud whose title alludes to Freud's Civilization and its Discontents. Marcuse's vision of a non-repressive society (which runs rather counter to Freud's conception of society as naturally and necessarily repressive), based on Marx and Freud, anticipated the values of 1960scountercultural social movements.
In the book, Marcuse writes about the social meaning of biology – history seen not as a class struggle, but fight against repression of our instincts. He argues that capitalism (if never named as such) is preventing us from reaching the non-repressive society "based on a fundamentally different experience of being, a fundamentally different relation between man and nature, and fundamentally different existential relations". See also Bernard Stiegler, "Spirit, Capitalism and Superego".

Another member of the Frankfurt School was Erich Fromm, who left the group at the end of the 1930s.
The culmination of Fromm's social and political philosophy was his book The Sane Society, published in 1955, which argued in favor of humanist, democratic socialism. Building primarily upon the works of Karl Marx, Fromm sought to re-emphasise the ideal of personal freedom, missing from most Soviet Marxism, and more frequently found in the writings of classic liberals. Fromm's brand of socialism rejected both Western capitalism and Soviet communism, which he saw as dehumanizing and bureaucratic social structures that resulted in a virtually universal modern phenomenon of alienation.

Jacques Lacan was a philosophically sophisticated French psychoanalyst, whose perspective came to predominate in French psychiatry and psychology. Lacan saw himself as loyal to and rescuing Freud's legacy. Lacan's influence has created a new cross-fertilisation of Freudian and Marxist ideas.

Louis Althusser is widely known as a theorist of ideology, and his best-known essay is Ideology and Ideological State Apparatuses: Notes Toward an Investigation. The essay establishes the concept of ideology, also based on Gramsci's theory of hegemony. Whereas hegemony is ultimately determined entirely by political forces, ideology draws on Freud's and Lacan's concepts of the unconscious and mirror-phaserespectively, and describes the structures and systems that allow us to meaningfully have a concept of the self. These structures, for Althusser, are both agents of repression and inevitable - it is impossible to escape ideology; to not be subjected to it. The distinction between ideology and science or philosophy is not assured once for all by the epistemological break, term borrowed from Gaston Bachelard: this "break" is not a chronologically-determined event, but a process. Instead of an assured victory, there is a continuous struggle against ideology: "Ideology has no history".
His essay Contradiction and Overdetermination borrows the concept of overdetermination from psychoanalysis, in order to replace the idea of "contradiction" with a more complex model of multiple causality in political situations (an idea closely related to Gramsci's concept of hegemony). 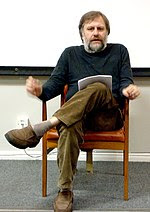 Slavoj Žižek
The Slovenian philosopher Slavoj Žižek has developed since the late 1990s a line of thought which uses Lacanian psychoanalysis, Hegelian
philosophy and Marxism. Althusser is also among his references. Particularly important to note here is his The Sublime Object of Ideology, which deals with the original Freudo-Marxist perspective.

Marx's theory of commodity fetishism has proven fertile material for work by other theorists since Marx, who have added to, adapted, or, as Marxistorthodoxy might see it, 'vulgarized' the original concept. Sigmund Freud's well-known but unrelated theory of sexual fetishism led to new interpretations of commodity fetishism, as types of sexually-charged relationships between a person and a manufactured object.