4 Most Common Atypical Antipsychotics NOT Safe OR Effective: Study 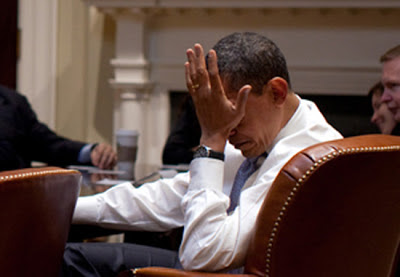 Most voters continue to see raising taxes as worse for the nation’s economy than cutting government spending. A new Rasmussen Reports national telephone survey finds that 54% of Likely Voters think raising taxes is more likely to hurt the economy than cutting government spending. Twenty-seven percent (27%) see cutting spending as worse, while 11% say neither will hurt the economy.

54% to 27%, and yet we're supposed to believe that 53% of the last election's popular vote went to President Obama:


And Now: We've Still got money to pay for This ongoing atrocity:

from Mad In America:

A Recent Study of Atypical Neuroleptics: The Results Of Our Study Are Sobering


This week, MIA highlighted a recently published study of the four most commonly prescribed neurolpetics.  As noted in the post, the major outcome was that these drugs were not found to be effective or safe.

This important study, co-authored by Dilip Jeste the current president of the American Psychiatric Association, is worth reviewing in greater detail.

The study was modeled to capture clinical practice.  Entry to the study was broad and not limited to a specific diagnostic category.  It is characterized as a study of “older adults” and I admit to some chagrin that this meant anyone over 40.  Diagnoses included schizophrenia, schizoaffective disorder,  and psychosis associated with mood disorder, PTSD or dementia.  It was open to individuals who were either already taking an atypical neuroleptic or had a psychiatrist who was recommending this.

Individuals were admitted to the study if they were willing to be randomized to at least 2 of the drugs studied: olanzapine, risperidone, aripiprazole, or quetiapine.   So a person who was only willing to take, for example, olanzapine and aripirazole, for example could be included but a person who was only willing to take risperidone could not. These four drugs were selected because they are the most commonly prescribed atypical neuroleptics. Subjects were then assigned to one of the drugs using a technique called equipoise-stratified randomization. Each subject had a list of acceptable drugs and was then randomized to one of the drugs along with all others who had an identical list.

Assessment was single blinded; subjects and their treating physicians knew which drug they were taking but the raters did not.  Ratings were done at baseline and periodically over 2 years.  They were assessed on a variety of measures including time to discontinuation of initial drug, Brief Psychiatric Rating Scale (BPRS) and its psychosis subscale, drug side effects, and metabolic parameters.  A total of 332 individuals consented to the study and completed at least a baseline visit.

What was most striking to me is this line from the study: there was

They did not even report the numbers in their report.
Also of note, they discontinued the use of quetiapine after 3.5 years due to a high incidence of adverse side effects.
The one year incidence of metabolic syndrome was 36.5%.
The authors discussion is so compelling, rather than paraphrasing, I will just quote directly:

“the results of our study are sobering.”
“there was no significant improvement in BPRS total or psychosis subscale scores over a 6 month period.”
“the overall risk-benefit ratio for the atypical antipsychotics in patients over age 40 was not favorable, irrespective of diagnosis and drug.”

“Shared decision making, involving detailed discussions with the patients and their family members or legal guardians about the risks and benefits of atypical antipsychotics and possible treatment alternatives, as well as of no pharmacologic treatment is warranted.” (bolding mine).

We often discuss the serious side effects of these drugs in the context of their presumptive benefit. To reiterate, unless I missed something,  in this study they did not find any benefit.

I want to give a nod to 1boringoldman for also alerting me to this study. His comments on this and many other topics are worth reading.

I wrote previously about another large a study that suggested that these drugs have relatively weak effects.  I am curious to see what the impact of these studies is on accepted practice within psychiatry.  Yesterday, the APA Board of trustees voted to approve the new DSM-5. This will undoubtedly gain significant attention within and outside of our field.  The time and expense that will be devoted to the role out of this edition is enormous. From my vantage point, it seems more important to put our energies into a serious consideration of the impacts and efficacy of the treatments we so readily prescribe than to a diagnostic manual that has so many problems.

Thank You Zip, Rasmussen, Mad In America and Dr. Steingard

Again, what is it we need to cut Out of the budget, FIRST? Anyone still need clarity here?
Posted by D Bunker at 8:49 AM 2 comments:

The Mental Elf has;
People With Schizophrenia Are Significantly More Likely To Die From Heart Disease And Cancer
Posted by André Tomlin at 9:00 am
Since starting this blog two years ago, I have written about a number of studies that highlight the health inequalities faced by people with severe mental illness.

The evidence keeps piling up and it’s really quite shocking that we are not doing more to diagnose and treat physical health problems in people with conditions such as schizophrenia and bipolar disorder:
People with severe mental illness generally have more contact with the healthcare system and yet they are still living 15-20 years less than the rest of the population.
A new cohort study has recently been published in the American Journal of Psychiatry, which can be added to this list. It looks at the association between schizophrenia, comorbidities and death, in both inpatients and outpatients.

The authors (from Stanford University in California and Lund University in Malmö, Sweden) used data following over 6 million Swedish adults (aged 25 and older) from 2003-9.
8,277 people were diagnosed with schizophrenia during the 2 years prior to the start of the study.
Scandinavian cohort studies often provide us with much more comprehensive data than we would get elsewhere, because the outpatient and hospital registries in countries like Sweden provide virtually complete data sets.
The study population was followed for 7 years and comorbidities and mortality were assessed to ascertain whether people with schizophrenia had different risk profiles to those without schizophrenia.

Schizophrenia patients had markedly premature mortality, and the leading causes were ischaemic heart disease and cancer, which appeared to be under-diagnosed. Preventive interventions should prioritise primary health care tailored to this population, including more effective risk modification and screening for cardiovascular disease and cancer.

The findings of this study can be added to the growing evidence base that people with severe mental illness are not getting the care and support they need for other health conditions.
As the recent National Schizophrenia Audit reminds us, more needs to be done to monitor and manage the physical health of people with schizophrenia.

HT to Mad In America
Posted by D Bunker at 11:10 AM No comments: