Sing it Babs, Sing it.

The Republican-led House sent the Senate a revised continuing resolution to fund the federal government over the weekend. The House included a year long delay of the individual mandate within the Affordable Care Act in the new CR, which Democratic lawmakers say will hurt women.
“The latest Republican shutdown plan continues its war on women,” said Sen. Barbara Boxer (D-Calif.) during a press conference this morning.
Boxer spoke alongside Sen. Debbie Stabenow (D-Mich.) and Sen. Mazie Hirono (D-Hawaii) to slam GOP lawmakers for continuing to try and repeal or delay the healthcare law as part of legislation to keep the government running beyond the end of this month.
Hirono outlined the benefits of the Affordable Care Act, citing the only benefit that had been removed was the Women’s Health amendment.
Keep reading…


Thank You TRNS and Zip.

Pelosi: Dems "Willing To Work With GOP On Keeping Govt Open" . . . But If They Don't Give Us Exactly What We Want The Govt Will Shut Down . . .

weaselzippers;
Pelosi: Dems "Willing To Work With GOP On Keeping Govt Open" . . . But If They Don't Give Us Exactly What We Want The Govt Will Shut Down . . .

And since the Govt is a euphemism for Nancy and people Like Nancy, A Govt Shutdown would be bad for America, . . . WHY? 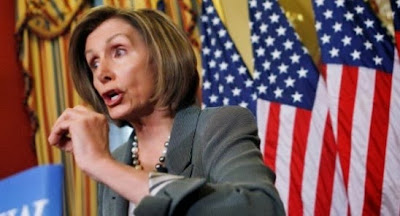 Contradict yourself much, Nancy? 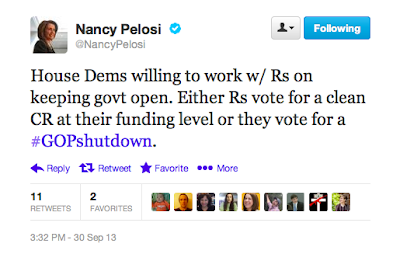 Perhaps she needs a 30 day shot of Invega or Haldol in her gluteus, and 16 or more 450 Volt electric shocks through her brain.

In San Francisco, They're After EVERY Child 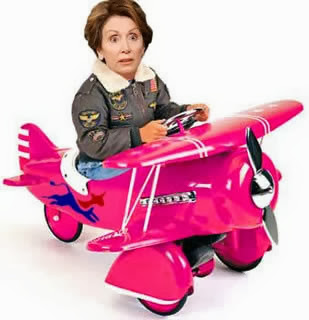 The Horror! The Horror! If The Govt Shuts Down, The National Zoo's Panda Cam Will Go Down!

weaselzippers;
WaPo Warns of Potential Catastrophe if Govt Shuts Down: The National Zoo's Panda Cam Will Go Down!

No, No, Nooooooo! anything but the Panda Cam! 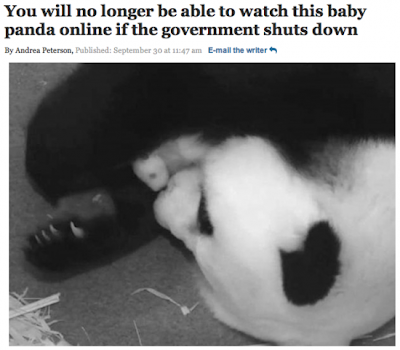 Noooooo! Not the panda cam!
Via WaPo:

You can watch the National Zoo’s yet un-named female panda cub be nursed by her mother Mei Xiang right now on the zoo’s panda cam. Go do it, I’ll wait. But if congressional leaders are unable to come to an agreement to avoid a government shutdown, the roughly half of federal employees who will be affected won’t even have the solace of watching the panda cub to distract them from their lack of paychecks.
The zoo announced on Twitter that the all live animal cams would go dark during a shutdown, along with in real life public options.


Thank You WaPo and Zip. 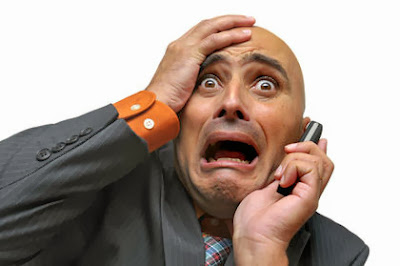 This, from the people screaming that "Anarchists" have taken over the Republican Party and if they are not checked, by blowing God knows How many more Trillions of Dollars We Don't Have, the sky will fall and we'll All die in the gutter. 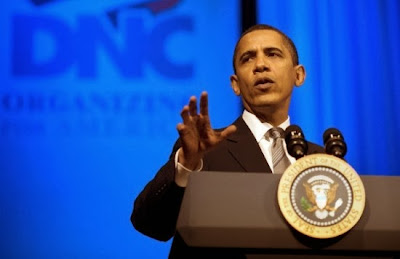 The RNC on the other hand has $12.5 million in cash on hand.

Thank You CNN and Zip.

They can't even afford to keep the lights on in their own boiler room.

Since you've only got two viable choices, which Party should you trust your childrens futures to?

Use the link and go read it at Zip's place. Too funny.
Posted by D Bunker at 2:59 PM No comments:

Researchers at the University of Georgia found that during times of higher unemployment, the use of antidepressant and antianxiety drugs rises. Using 21 years of data from the National Ambulatory Medical Care Survey of Physicians, the researchers found “effects too large to be explained by just those losing their jobs, which suggests recessions have a significant impact much broader than those directly affected by the job loss.” Said one author: “people were not necessarily depressed because they didn’t have a job, but maybe because they were afraid of getting laid off.” The researchers also noted that in areas with higher medical coverage, more people receiving medical assistance may result in more prescriptions for depression.
Article →
Bradford, D., Lastrapes, W.; A Prescription for Unemployment? Recessions and the Demand for Mental Health Drugs. Health Economics. Online August 19, 2013. DOI: 10.1002/hec.2983
Of further interest:Mental Illness Prescriptions Increase During Recession Period: Study (Sunday Times)
Thank You Mr Cole and MIA.

It's a testament to the abject failure of our centrally planned Feral Dept of Education that we needed a Study from a Prestigious University to discover these pieces of the 'Secret Wisdom'.
A Wrecked Economy is good for business, OR:
'Mental Illness': It's not a chemical imbalance in a person's brain.
It's not a Genetic Defect.
But it is contagious.
You get it from electing incompetents, liars, and thieves to government.
Posted by D Bunker at 11:36 AM No comments:

administration is effectively banning the construction of new coal-fired power plants, a move officials admit will have little to no impact on global warming.
“The EPA

does not anticipate that this proposed rule will result in notable CO2 emission change … by 2022,” the agency writes in its proposal to limit greenhouse gas emissions.
“EPA knows there aren’t benefits,” Dan Simmons, director of regulatory and state affairs at the Institute for Energy

Research, told The Daily Caller News Foundation. “EPA and environmentalists are being disingenuous when they claim this rule will have an impact on the climate or the environment 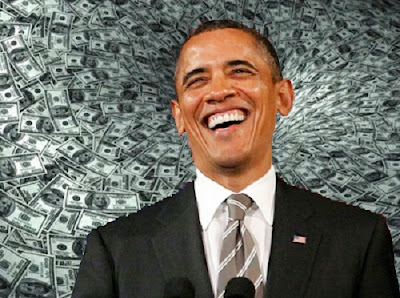 According to the report:  “Specifically, the IRS did not account for or attempt to quantify approximately $67 million [from the slush fund] of indirect ACA costs incurred for Fiscal Years 2010 through 2012.”

The report also found several other abuses of taxpayer funds, including:

Travel abuse:  The report states, “Specifically, we identified 38 IRS employees in two judgmentally selected business units whose travel was charged to the HIRIF in FY 2012, but no portion of their salary and related benefits was charged to the HIRIF.” In short, the IRS was not making sure that employee travel reimbursements had anything to do with the purpose of the fund. This is not the first time that IRS employee travel has created a scandal for the agency.

The IRS requested an additional 859 IRS Obamacare enforcement agents for Fiscal Year 2013: According to the report, “The IRS informed us that it requested $360 million and 859 FTEs for FY 2013 to continue implementation of the ACA. However, the IRS did not receive this requested amount for FY 2013.”

To add insult to injury, the IRS has told the Inspector General that it will comply with the recommendations made in the report; unfortunately, the slush fund has been fully spent, making that promise meaningless.

So, here's another $223,333.33 out of the pocket of Every Person in the United States, Missing in Action, to prop a program that at least 85% of America doesn't want.

On top of this HHS $67 Million divided by 300 Million people,
Latest ObamaCare Push: $67 Million for 'Messengers'


And that figure barely scratches the surface.

It's going to get worse, much worse.

Pelosi: "George Washington Warned Us About People Like The Tea Party"

weaselzippers;
Pelosi: "George Washington Warned Us About People Like The Tea Party"


Washington last seen rolling over in his grave.
Via Washington Times: 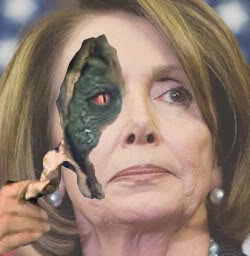 House Minority Leader Nancy Pelosi said Friday that the “tail is wagging the dog” in the Republican party in the ongoing debate over spending on Capitol Hill.
Mrs. Pelosi told reporters on Capitol Hill that Democrats are prepared to work with Republicans to pass a continuing resolution that keeps government operations running past Monday, but that it has been a heavy lift because of the infighting within the GOP.
“It is impossible for Democrats to negotiate with Republicans because they can’t even negotiate with themselves,” the California Democrat said. “Instead of legislating responsibly, they want to live dangerously.”
The GOP-controlled House is waiting on the Democrat-led Senate to act on a spending bill that would keep the government open through Nov. 15 and strip funding for Obamacare.
The Senate is expected to strip out the Obamacare provision and send the bill back to the House as early as Friday.
The process, though, has been bogged down by a breakaway group of conservative Senators led by Mike Lee of Utah and Ted Cruz of Texas who are calling on their colleagues to do everything they can to gum up the legislative process and stop funding for Obamacare.
“This is silly,” Mrs. Pellosi said. “Maybe they did not get some orientation on how serious the work is that we do here. Clearly they are a manifestation of what President Washington cautioned against when he left office, which is political parties at war with their own government, and that is what we have: the tail wagging the dog of the Republican party.”

Thank You Washington Times and Zip.

Here's a quotable from George Washington.

"Government is like fire, a dangerous servant and a terrible master."

Pelosi: Only from a town drowning is a sea of completely useless - even the VA admits they've never had a positive outcome from them -

Dear US Department Of Veterans Affairs, An Open Letter