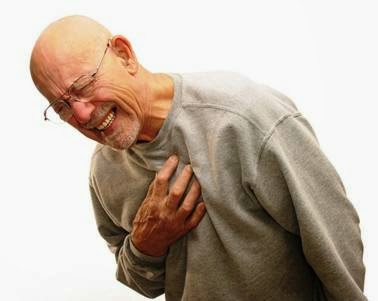 December 28, 2014 | By Ron Shinkman
If you have a heart attack, heart failure or cardiac arrest while your cardiologist is out of town at a major industry conference, no worries--you're actually more likely to live.

That is the conclusion of a study that appeared in the most recent edition of the journal JAMA Internal Medicine.

The study followed more than 29,000 frail patients who suffered heart attacks, heart failure or cardiac arrest patients covered by Medicare and hospitalized at 263 major teaching hospitals during two recurring annual cardiology conferences between 2002 and 2011. Those conferences are held by the American Heart Association and the American College of Cardiology (ACC) and they tend to draw cardiac specialists from throughout the U.S.

"There's something very specific about cardiology meetings and cardiology outcomes," Anupam Jena, M.D., a professor at Harvard Medical School and the lead researcher of the study,  told Kaiser Health News. "I can tell you with almost certainty that something different is happening in the hospital, but I can't tell you why this is happening."

The assumption now may be that aggressive treatments and interventions do not necessarily help frailer patients who are having cardiac issues, according to  Kaiser Health News. "People should take away from this particular paper that they should be confident of going to a teaching hospital at any time of the year," Patrick O'Gara, M.D., president of the ACC, told the publication.

To learn more:
- read the study  abstract
- check out the article

We wish we could call this news a surprise, but all we Can say is that it's exactly what we've come to expect of this entire industry.

It's not a case of either "Your money or your Life."

Prog Rule: Michigan Has More Food Stamp Recipients In The State Than Students Not exactly what a state should be striving for…
Via Breitbart:

Michigan now has more food stamp recipients than it does public school students, an analysis of federal and state statistics by Breitbart News reveals.
Michigan, which announced on Friday plans to begin drug testing some welfare recipients, currently has 1,679,421 individuals on food stamps (known officially as the Supplemental Nutrition Assistance Program, or SNAP), according to the U.S. Agriculture Department. According to the Michigan Department of Education, the state’s total pupil count for K-12 is 1,564,114.
Keep Reading…

Thank You Breitbart and Mr Stone.


They must have a ball balancing the State budget there. 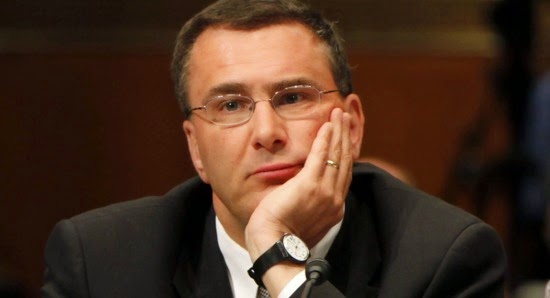 President Obama’s health care adviser Jonathan Gruber said that the Affordable Care Act would definitely not be affordable while he was writing the bill with the White House.
As Gruber continues to withhold documents while he awaits a call-back for more testimony before the House Oversight and Government Reform Committee in the new year, more shocking information is coming to light detailing the deceptions that went into the writing of the health-care law.
Gruber said that Obamacare had no cost controls in it and would not be affordable in an October 2009 policy brief, presented here exclusively by TheDC. At the time, Gruber had already personally counseled Obama in the Oval Office and served on Obama’s presidential transition team. Obama, meanwhile, told the American people that their premiums would go down dramatically.
“The problem is it starts to go hand in hand with the mandate; you can’t mandate insurance that’s not affordable. This is going to be a major issue,” Gruber admitted in an October 2, 2009 lecture, the transcript of which comprised the policy brief.
Keep reading…

Thank You DC and Zip. Not held responsible for the waiting lists or deaths.
Via Stars and Stripes

The government agency charged with making sure federal employees are treated fairly upheld this week the Department of Veterans Affairs decision to “formally remove” Sharon Helman, director of the Phoenix Department of Veterans Affairs’ Health Care System and the leader at the center of the biggest scandal in the agency’s history.
But the ruling by the Merit Systems Protection Board could not substantiate that Helman knew or should have known that employees at her hospital lied about health-care wait times for former troops seeking treatment for everything from cancer to post-traumatic stress disorder.
Instead, as the basis for upholding her removal, the judge named other charges against her by the VA, which said she accepted “inappropriate gifts,” such as a trip to Disneyland “in excess of $11,000 for what appears to be six of her family members for an 8-night stay,” and $729.50 for five tickets last year and parking to a Beyonce concert on Aug. 24, 2013.[…]
In the ruling, Chief Administrative Judge Stephen Mish rejected the VA’s other charges, which said that Helman failed to see that veterans were waiting months or even years to get health care. But the judge said the VA failed to demonstrate any actions or inactions on the part of Helman that caused it.
“To phrase it more colloquially, an agency must connect the dots of fault from the identified failure by the subordinates back up the line to the manager,” the judge wrote. “The agency did not attempt to do so here. Accordingly, this specification is not sustained.”
Similarly, the VA said Helman failed to process 2,500 new claims that were found, which led hundreds of veterans to be without health care for more than a year. But the judge again said the VA did not provide enough information to the board.
The ruling also points out that linking Helman’s removal to the wait-times issue is complex. The report notes that the VA’s office of the inspector general did not interview Helman about wait times during their investigation into the issue.

Keep reading
Thank You Stars and Stripes and Dapandico
Posted by D Bunker at 12:41 PM No comments:

Not An Onion Study: Laughing Gas vs Air For Treatment of Depression

“Nitrous oxide, or laughing gas, has shown early promise as a potential treatment for severe depression in patients whose symptoms don’t respond to standard therapies,” stated a press release about a widely-reported study that was published in Biological Psychiatry. The press release also stated that over a third of the patients improved after being given air.
In the study, Washington University School of Medicine researchers identified 20 patients with “treatment-resistant clinical depression,” and alternately gave them laughing gas and “a placebo mixture of oxygen and nitrogen, the two main gases in the air we breathe.”
Of the 20 patients, 7 reported “mild improvement” and 7 “significant improvement” for a day after receiving the laughing gas, stated the press release. The researchers expressed hope that there would be more studies into laughing gas, and said they found it “kind of surprising that no one ever thought about using a drug that makes people laugh as a treatment for patients whose main symptom is that they’re so very sad.”
The press release also noted that, after receiving the air, five patients reported mild improvements, and two reported that they felt “significantly better.” However, one patient experienced worse symptoms the next day after receiving air. Conversely, the researchers wrote, “No patients said their symptoms worsened after treatment with nitrous oxide.”
Laughing gas studied as depression treatment (Washington University in St. Louis press release, December 9, 2014)
This entry was posted in Featured News, In the News, Placebos, Psychiatric Drugs by Rob Wipond. Bookmark the permalink.

Another Study Finds No Benefits From Forced Outpatient Treatment


The OCTET is a randomized controlled trial of the effectiveness of community treatment orders — often called “assisted outpatient treatment” in the United States. Several hundred patients were followed for a year and “there was no significant difference at 12 months” between patients being subjected to forced treatment and those who were not. In light of the lack of benefits, the continued use of forced outpatient treatment, stated the researchers, “should be carefully reconsidered.”
(Abstract) Community treatment orders: clinical and social outcomes, and a subgroup analysis from the OCTET RCT (Rugkåsa, J et al. Acta Psychiatrica Scandinavica. Published online before print December 11, 2014. DOI: 10.1111/acps.12373)
This entry was posted in Featured News, In the News, Involuntary Treatment, Legislation & Regulationby Rob Wipond. Bookmark the permalink.

Idiot Anti-Gun PSA Encourages Children To Steal Their Parents Guns And Surprise Teachers By Turning Them Over, To Unsuspecting Teachers


…One can only imagine that the spot’s producers consider their set up to be inordinately clever. “Hey,” you can almost hear them say, “we’ll make it look as if there’s going to be a school shooting, and then he’ll hand it over to his teacher and all will be well!” In fact, it is difficult to imagine a more irresponsible storyline. We’re talking about children here, remember – impressionable, easily led, ignorant children. (Adults are an entirely separate question.) As a rule, we teach our kids that they if they see a firearm they should refrain from touching it, and go and tell an adult. In the commercial, however, the child is shown doing the exact opposite. “If you see a gun,” the ad suggests, “pick it up, put it in a bag, and then jostle it around in front of other children.” One can only wonder at how many kids will now need to be told that they must not, under any circumstances, do this.

Thank You Zip and NRO


The people responsible for this piece of idiocy are going to get impressionable and uninformed kids arrested, injured, or killed with it.

This vid is inciting children who don't know any better to commit felony weapon violations. Bringing a concealed firearm, perhaps loaded, onto school grounds in a back pack?

Scaring the crap out of an unsuspecting teacher when they plunk the gun down on the desk before her?

How about they Surprise a teacher who knows weapons? And are immediately taken to the floor in a choke hold? Or they get stopped by a janitor who recognizes the shape of the bulge in the back pack before they have time to surrender it or explain themselves?

But then what would you Expect from an anti-gun group?
Posted by D Bunker at 4:50 PM No comments: 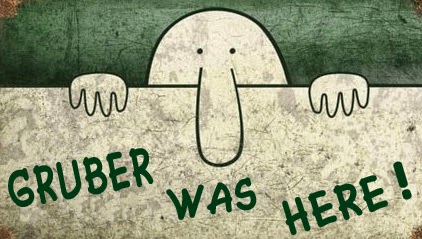 It is Gruber time again.
Via Washington Times

If you like your health care plan, the Centers for Medicare and Medicaid Services (CMS) has a Christmas surprise for you! When will this new present arrive? December 25th.
In an ongoing effort to keep Obamacare numbers elevated, CMS has embarked on the next step of its government takeover of healthcare.
It seems CMS is taking a page from Jonathan Gruber’s book; rather than allowing the “stupid” masses to make a decision on their own health plan, CMS has proposed a new rule that includes an overly reaching provision allowing CMS to re-enroll anyone who has not made the annual trek back to healthcare.gov in a cheaper plan of CMS’ choosing.[…]
CMS has laid the perfect trap: Sign up at healthcare.gov one time in your life and we will never let you go. If you don’t continually re-enroll each and every year, CMS will keep you on the plan that it chooses because, after all, CMS knows what’s best and they always make the best decision. Oh, and if you don’t believe that, please go to the 600 million dollar website that will give you all kinds of testimonials handcrafted by MIT professors.
To be clear, a citizen will sign up once for a private plan with a healthcare provider, only to have that plan changed by the federal government. Moreover, CMS will change your plan after the open enrollment period ends, leaving you and your family stuck with a potentially unwanted plan for the year.

Thank You Wash Times and Dapandico
Posted by D Bunker at 4:21 PM No comments: