And you wonder why the Proletariat gets depressed. 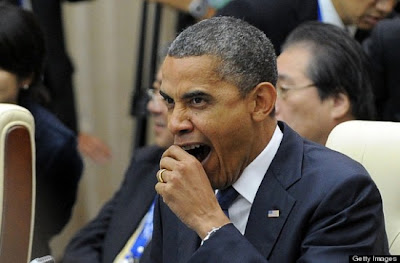 And there’s nothing better to jump start a floundering economy than a flood of government regulations.
Via The Hill:

The Obama administration issued $236 billion worth of new regulations last year, according to a report from a conservative think tank.
The analysis from the American Action Forum, led by former Congressional Budget Office Director Douglas Holtz-Eakin, found that the administration added $216 billion in rules and $21 billion in regulatory proposals in 2012. Complying with those rules will require an additional 87 million hours of paperwork, the report said.
The group put the total price tag from regulations during Obama’s first term at more than $518 billion.
American Action Forum credited the administration for erasing $2.5 billion in regulatory costs last year, but said that paled in comparison to $34 billion in regulatory compliance costs reported by top companies since 2009.

Federal Welfare Spending To Skyrocket 80% In Next Decade 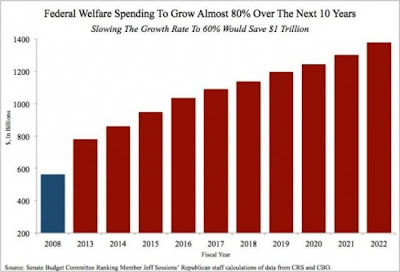 Totally sustainable, nothing to worry about.
Via Weekly Standard:

“This chart displays projected federal spending on federal welfare programs over the next ten years, based on data from the Congressional Research Service and Congressional Budget Office,” the Republican side of the Senate Budget Committee explains. “These figures do not count state contributions to federal welfare programs (primarily on low-income health assistance) which brought total welfare spending in FY2011 to more than $1 trillion – dwarfing any other budget item including Medicare and Social Security, and totaling enough to mail every household in poverty a check for 60k each year.”
Keep reading… 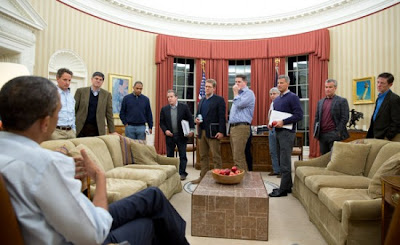 The MSM would beat this to death if it was a Republican president.
Via Daily Caller:

While President Barack Obama handily won the women’s vote by 11 percentage points in November over Republican nominee Mitt Romney, his administration paid the women on his payroll less than his male employees last year.
A Daily Caller analysis of the administration’s “2012 Annual Report to Congress on White House Staff” shows that while women comprised about half of the 468 staffers — as the president touted during his press conference Monday – they also earned about 13 percent less, on average, than their male counterparts.
The median 2012 salary for female employees of the White House was $62,000; for men that number was $71,000.
Keep reading…

AND: The Response to this Is?

Publicly Funded Research Must Continue because the Uber Moochers researching our Nation wide Epidemic of Depression haven't got a Clue as to how to Cure it.